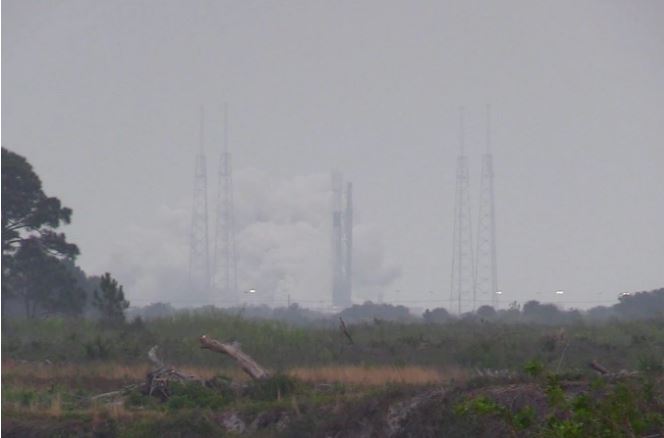 SpaceX test-fired its next Falcon 9 rocket Friday ahead of a planned launch Sunday from Cape Canaveral with 60 more Starlink Internet satellites, days after an international group sounded another warning about the effects of large satellite fleets on astronomy.

The hold-down firing Friday at Cape Canaveral signaled a milestone in SpaceX’s preparations for the next Starlink launch Sunday, a one-day delay from the mission’s previous target launch date caused by poor weather in the Falcon 9’s first stage recovery zone in the Atlantic Ocean.


After engine shutdown, SpaceX teams secured the rocket and drained propellants in preparation for final data reviews and a launch attempt Sunday. SpaceX confirmed the new target launch date in a tweet Friday morning after the static fire test.

Launch time Sunday is set for 10:25 a.m. EST (1525 GMT) to place 60 more flat-panel Starlink broadband satellites into orbit. The Falcon 9 is expected to deliver the 60 spacecraft into orbit nearly 200 miles above Earth around an hour after liftoff.

Sunday’s launch will mark the fifth Falcon 9 flight dedicated to the Starlink network since last May. The five missions have deployed 300 Starlink satellites — each weighing about a quarter-ton and broadcasting in Ku-band frequencies — to begin building out a fleet of signal relay stations.

The first phase of SpaceX’s Starlink program, which aims to beam consumer broadband to customers around the world, will include 1,584 of the flat-panel satellites in orbit around 341 miles (550 kilometers) above Earth.

SpaceX has approval from the Federal Communications Commission to operate nearly 12,000 Starlink satellites in Ku-band, Ka-band and V-band frequencies, with groups of spacecraft flying at different altitudes with various orbital tilts, or inclinations.

Last year, SpaceX signaled to the International Telecommunication Union that it may seek authority to operate up to 30,000 additional broadband satellites in low Earth orbit, potentially bringing the total Starlink fleet to 42,000 platforms.

But SpaceX says the fleet’s growth will hinge on demand, and the company must launch roughly 20 more missions before completing the first phase of its Starlink network.

SpaceX also needs to test the network and begin selling the Starlink service, and work continues on user terminals to link customers on the ground with the satellite network in space. The company has not announced a price or Internet speeds for its consumer-grade service.

The rapid-fire deployment of Starlink satellites — coupled with plans for other large satellite fleets — has astronomers worried that the proliferation of small spacecraft could impact observations by ground-based telescopes.

The Starlink satellites are brighter than predicted, sometimes reflecting sunlight and becoming as bright as the most luminous stars in the night sky. But the brightest sightings occur only soon after a launch, when the satellites are flying at lower altitudes and are clumped close together.

The satellites are harder to spot as they spread out in the weeks after a launch and begin raising their orbits to their 341-mile-high operating altitude. But scientists caution they will pose a threat to high-power telescopes, such as the U.S. government-funded Vera C. Rubin Observatory under construction in Chile.

The International Astronomical Union — a global body chartered in 1919 to “promote and safeguard the science of astronomy” — said Wednesday that it “considers the consequences of satellite constellations worrisome.”

“They will have a negative impact on the progress of ground-based astronomy, radio, optical and infrared, and will require diverting human and financial resources from basic research to studying and implementing mitigating measures,” the IAU said in a press release.


“A great deal of attention is also being given to the protection of the uncontaminated view of the night sky from dark places, which should be considered a non-renounceable world human heritage,” the IAU said.

At the request of the IAU, scientists from the Vera Rubin Observatory, the University of Michigan, the Centro Astronómico Hispano-Alemán, the European Southern Observatory and the European Space Agency modeled the frequency, location and brightness of satellites in planned “mega-constellations” flying in low Earth orbit.

The IAU said the results of the simulations are preliminary. Some of the simulations assumed more than 25,000 broadband satellites could be deployed in low Earth orbit, in which case between 1,500 and a few thousand spacecraft could be above the horizon at any given time, depending on the observer’s latitude.

The “vast majority” of those satellites would not be visible to the naked eye, according to the IAU. The simulations showed that around 250 to 300 of the spacecraft above the horizon at any given time would have an elevation of more than 30 degrees, the region of the sky where astronomers perform most of their observations.

At astronomical dawn and dusk — when the sun is 18 degrees below the horizon — simulations suggest around 1,000 satellites could be illuminated by sunlight and above the horizon. Around 160 of the illuminated spacecraft could be higher than 30 degrees in the sky at one time, and those are the satellites that pose the greatest threat to astronomical research.

The numbers of illuminated satellites will decrease in the middle of the night, according to the IAU.

In response to astronomers’ concerns, SpaceX launched one satellite in early January with an experimental darker coating. The long-term effectiveness of the external treatment will not be known until the satellite reaches the Starlink fleet’s operational altitude.

Gwynne Shotwell, SpaceX’s president and chief operating officer, said in December the company was in dialog with astronomers about the issue.

“Astronomy is one of a few things that gets little kids excited about space,” Shotwell said. “There are a lot of adults that get excited, too, who either depend on it for their living or for entertainment. But we want to make sure we do the right thing, to make sure little kids can look through their telescopes. It’d be cool for them to see a Starlink. I think that’s cool. But they should be looking at Saturn and the moon.”

The other company on the cusp of launching hundreds, and perhaps thousands, of broadband satellites is London-based OneWeb.

OneWeb has launched 40 satellites to date, with plans to launch roughly 32 to 36 more every month to deploy an initial fleet of nearly 650 spacecraft. But like SpaceX, OneWeb has plans to grow from there.

The satellites owned by OneWeb are smaller than the Starlink spacecraft, and they orbit higher, allowing the company to provide global coverage with fewer satellites than SpaceX. The higher altitude also means they will be dimmer to ground observers, the company says.

“We’re going to do the most we can to mitigate (astronomers’ concerns),” said Adrian Steckel, OneWeb’s CEO. “We’re not visible to the naked eye. We are visible to telescopes. It’s hard to get around some of those facts.”

Scientists have also questioned whether constellations of thousands of satellites broadcasting broadband data will interfere with radio astronomy, which uses giant antennas to listen to faint radio signals generated from distant stars and galaxies.

“With respect to radio frequency … we’ll try,” Steckel said earlier this month. “We’re going to do the most we can. I don’t know if there will be a solution that will make everybody happy. At least we’re in dialog, and we’re trying to get feedback on what can we do.”

The IAU said there is still uncertainty in the eventual impacts of huge flocks of satellites on astronomy.

“At the moment it is difficult to predict how many of the illuminated satellites will be visible to the naked eye, because of uncertainties in their actual reflectivity,” the IAU said, referencing the unknown outcome of SpaceX’s experiments with darker coatings.

“The appearance of the pristine night sky, particularly when observed from dark sites, will nevertheless be altered, because the new satellites could be significantly brighter than existing orbiting man-made objects,” the IAU said. “The interference with the uncontaminated view of the night sky will be particularly important in the regions of the sky close to the horizon and less evident at high elevation.”

The IAU said astronomical impacts during the period of time when Starlink satellites are brightest — soon after a launch — depend on how long the spacecraft are flying at lower altitudes, and the frequency of launches.

“Apart from their naked-eye visibility, it is estimated that the trails of the constellation satellites will be bright enough to saturate modern detectors on large telescopes,” the IAU concluded. “Wide-field scientific astronomical observations will therefore be severely affected. For instance, in the case of modern fast wide-field surveys, like the ones to be carried out by the Rubin Observatory (formerly known as LSST), it is estimated that up to 30 percent of the 30-second images during twilight hours will be affected.”

Formerly known as the Large Synoptic Survey Telescope, the Vera Rubin Observatory will capture deep, wide-field images of the entire available sky, allowing astronomers to learn more about dark energy and dark matter, and detect potentially hazardous asteroids with orbits near Earth, among other objectives.

“Instruments with a smaller field of view would be less affected,” the IAU continued. “In theory, the effects of the new satellites could be mitigated by accurately predicting their orbits and interrupting observations, when necessary, during their passage. Data processing could then be used to further ‘clean’ the resulting images. However, the large number of trails could create significant and complicated overheads to the scheduling and operation of astronomical observations.”


The IAU’s statement Wednesday focused on optical astronomy. Astronomers continue studying the possible interference that signals transmitted by broadband satellites in low Earth orbit will have on radio astronomy.< The IAU said there are no internationally-agreed rules of guidelines on the brightness of satellites. The group said it will present its findings to the United Nations to bring the attention of world government representatives on the issue. “The IAU stresses that technological progress is only made possible by parallel advances in scientific knowledge,” the group said. “Satellites would neither operate nor properly communicate without essential contributions from astronomy and physics. It is in everybody’s interest to preserve and support the progress of fundamental science such as astronomy, celestial mechanics, orbital dynamics and relativity.