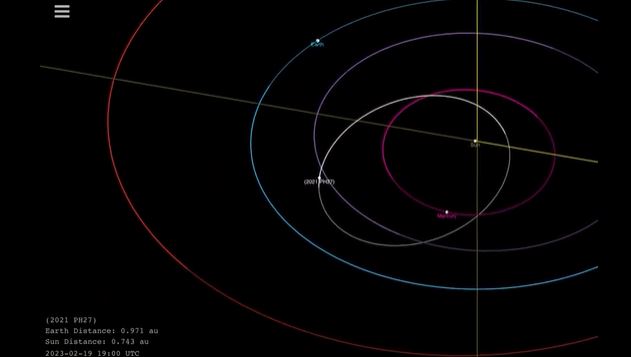 American astronomers have found the closest asteroid to the Sun, orbiting a star in a record 113 Earth days. Only Mercury turns faster, in 88 days, but the elongated orbit of the new asteroid allows it to come even closer to the Sun at times.

The newly discovered asteroid 2021 PH27 takes only 113 Earth days to complete a revolution around the Sun, which is how long it lasts for a year. This is less than any of the asteroids known to us, and in general, this is the shortest orbital period among all objects in the solar system, with the exception of Mercury, which lasts only 88 Earth days. However, the elongated elliptical orbit of 2021 PH27 allows it at times to be even closer to the Sun than Mercury. At its closest approach, it approaches the Sun at 20 million km, while Mercury – at 46 million km. At the maximum distance, the asteroid is farther from the Sun than Venus.

The asteroid was first discovered on August 13 by American astronomers using the 570-megapixel DEC camera on the four-meter Victor Blanco telescope at the Cerro Tololo Inter-American Observatory in Chile. Observations with other telescopes on August 14 and 15 confirmed the discovery. This was reported in a press release from the Carnegie Institution in Washington. A circular about the new discovery is posted on the website of the Minor Planets Center of the International Astronomical Union.

Over the next few days of observations at DEC, as well as at the Magellan telescopes, the Las Campanas Observatory in Chile and some others managed to restore the orbit of the new asteroid. For this, scientists say, it was even necessary to make some changes in the observation schedule, but it was worth it.

“While telescope time is valuable to astronomers, international collaboration and interest in the unknown sometimes prompts other observations to be postponed to focus on exciting new discoveries like ours,” says Scott Sheppard, who led the pioneering team. This astronomer, who works at the Carnegie Institution, is known as the discoverer of many satellites of the giant planets, as well as Kuiper belt objects, asteroids from the centaur group between the orbits of Jupiter and Neptune, and near-Earth asteroids. In March 2014, he and Chadwick Trujillo discovered the dwarf planet 2012 VP113, and in November 2018, together with David Tolen and Chadwick Trujillo, the trans-Neptunian object 2018 VG18. They were considered the most remote at that time.

According to Sheppard and colleagues, 2021 PH27 is about one kilometer across. The asteroid may have formed in the Main Asteroid Belt between Mars and Jupiter, and then, probably, it was ejected closer to the Sun as a result of gravitational interaction with one or more objects.

During close encounters with the Sun, the surface of 2021 PH27 becomes so hot that lead can melt there – about 500 ° C. These plunges into the sun’s gravity well also mean that the effects of general relativity are on the asteroid in the most significant way among all known objects in the solar system. These effects show up in small changes in the 2021 PH27 elliptical orbit identified by a team of astronomers.

In the long term, this orbit is unstable. According to members of the group, in a few million years, the asteroid is likely to collide with the Sun, Mercury or Venus, unless it significantly changes its orbit as a result of some other gravitational interaction during this time.

The orbital plane of 2021 PH27 has an inclination of 32 ° relative to the plane of the solar system (the ecliptic plane). This high tilt suggests that 2021 PH27 could also be a former comet that formed somewhere on the outskirts of the solar system and then trapped in a lower orbit after passing by Mars, Earth, Venus, or another object in the inner solar system.

The 2021 PH27 discovery is also important because it allows astronomers to study potentially hazardous asteroids to the Earth in the inner solar system. The fact is that asteroids near the Sun are generally difficult to detect due to the fact that their light interferes with telescopes. “Estimating the number of asteroids within the Earth’s orbit is important for completing the census of asteroids near the Earth, including some of the most dangerous ones that can approach the Earth during the daytime and are not included in most surveys conducted at night among asteroids not approaching the Sun,” explained Scott Sheppard.

Further observations will likely help solve all of these mysteries, but Sheppard and other astronomers will have to wait several months to collect more data. Currently, the asteroid 2021 PH27 is located behind the Sun and will become available for observations again only at the beginning of 2022.

Until 2020, the asteroid 2019 LF6 from the Atir group was considered the record holder, which made one revolution around the Sun in 151 days, in 2020 this title temporarily passed to 2020 AV2, in which the year lasts 145.6 days, and the orbit is entirely inside the orbit of Venus.