“To mine cryptocurrency in a black hole”: scientists are looking for aliens in unexpected places 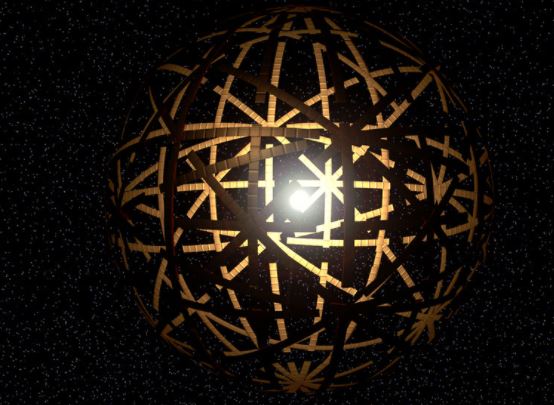 Scientists have proposed looking for Dyson spheres in space, which super civilizations can build around black holes, that is, megastructures that collect all the energy emitted by a black hole. Theoretically, it is possible to build such objects, but they will allow earthlings to establish the very fact of the existence of such civilizations.
New research shows that highly advanced alien civilizations could theoretically build a megastructure, called a Dyson sphere, around a black hole to use all the energy coming from it, which is capable of 100,000 times that of the sun. If such objects really exist, this will help humanity to establish the very fact of the existence of super civilizations.

To use all the energy of the star, the American physicist Freeman Dyson, back in 1960, proposed building gigantic astro-engineering structures that enclose the entire star in a shell, later called the Dyson sphere. Most likely, the Dyson sphere will have to consist of many satellites orbiting the star, since a single solid cocoon will inevitably collapse under the influence of the gravity of the central star.

Dyson himself admitted that the idea was prompted by Olaf Stapledon’s fantasy novel “The Creator of the Stars.” Such megastructures will be able to transform the solar energy captured by them into the form necessary for civilization, but this process will inevitably be accompanied by heat losses. In the simplest case, this heat will manifest itself from afar in the infrared spectrum, so that stars with excess infrared radiation can become a key target in the search for extraterrestrial life. Freeman Dyson wrote about this in his article ” Search for artificial stellar sources of infrared radiation “, published in the journal Science.

Unfortunately, both Nikolai Kardashev and Freeman Dyson are no longer with us, they died relatively recently, on August 3, 2019, and February 28, 2020, at the age of 87 and 96 years.

Searches for Dyson spheres in space have been carried out, even some candidates have been found, but no reliable options have emerged. Chinese astronomer Tiger Yu-Yang Xiao of Tsinghua University believes that humanity may be looking for the wrong thing. In a new study published in the Monthly Notices of the Royal Astronomical Society and arXiv.org, he and his colleagues decided to find out if it was possible at least theoretically to build a Dyson sphere around a black hole. They analyzed black holes of three different sizes: the mass of five suns, as well as 20 and 4 million times the mass of the Sun. These are respectively the lower and upper limits for the mass of black holes formed as a result of the collapse of massive stars, and the mass of the small supermassive black hole in the center of the Milky Way galaxy, an object called Sagittarius A *.

Black holes themselves do not produce energy but only consume it. However, this process of consumption of energy and matter by a black hole is accompanied by enormous losses, which usually betrays the existence of a black hole to an external observer. Powerful gravitational fields can generate energy through several processes. First of all, this is radiation emitted by clusters of gas around the hole, twisting into the so-called accretion disk. Particles of matter moving at relativistic speeds and colliding with each other generate radiation in all wavelength ranges, but black holes emit especially a lot in the X-ray range. Two relativistic jets of matter and energy are shot out along the axis of rotation of the black hole. In addition, the existence of Hawking radiation is theoretically predicted, which allows black holes to gradually lose mass,

As a result of their calculations, Xiao and his colleagues came to the conclusion that the accretion disk, surrounding gas and jets of black holes can serve as suitable sources of energy for supercivilization. In fact, the energy from the accretion disk of a black hole with a stellar mass of 20 suns alone can provide the same amount of energy as Dyson spheres arrayed around 100,000 stars.

And if an extraterrestrial civilization managed to use the resources of a supermassive black hole, then the energy that could be obtained would increase another million times.

The article also discusses the possible location of the Dyson sphere around the black hole. To effectively absorb the radiation from the accretion disk, it will be possible to limit ourselves to the so-called Dyson ring or Dyson swarm. The structure should be located outside the accretion disk, at distances of a thousand or even 100 thousand Schwarzschild radii, or gravitational radii that determine the characteristic size of a black hole, its event horizon. However, in this region, ultra-high temperatures would melt the hard shell. To avoid melting of the solid Dyson sphere, in the case of a black hole of stellar mass, the envelope must be moved even further, by 10 million Schwarzschild radii. For a supermassive black hole, the distance will be on the order of a thousand Schwarzschild radii. The size of the accretion disk for a black hole with stellar mass is less than the size of the Sun, which means that the Dyson sphere around a black hole of stellar mass may be less than around the Sun. From the point of view of using relativistic jets, the so-called Dyson bubble would be the optimal shape of the Dyson sphere. By balancing the pressure and gravity of the black hole, such a light bubble sail could remain stationary.

If this technology is feasible, then we might have a chance to see it all. Thermal radiation from the so-called Dyson Hot Sphere – which is somehow capable of withstanding temperatures in excess of 3000 K, above the melting point of known metals – around a stellar-mass black hole in our galaxy, will be detected in the ultraviolet range, the researchers said. Such signals can be found in data from a wide variety of telescopes, including NASA’s Hubble Space Telescope and GALEX (Galaxy Evolution Explorer), NASA’s orbiting ultraviolet space telescope.

Meanwhile, the “hard” Dyson sphere, operating at temperatures below 3000 Kelvin, could be observed in the infrared range, for example, using the ground-based SDSS (Sloan Digital Sky Survey) or NASA’s WISE (Wide-field Infrared Survey Explorer) orbiter. The latter is no longer a beginner in the search for infrared signals from Dyson’s “traditional” stellar spheres, but, as in the case of other similar projects, WISE has not yet found anything convincing either.

“I like this speculation about what advanced civilizations can do,” says Tomáš Opatrny, a Czech physicist at Palacky University in Olomouc, who was not involved in writing the article, but also thought about the possibility of the existence of alien civilizations near black holes and wrote on this the topic of scientific work. He agrees that the Dyson sphere around the black hole can indeed provide its builders with a lot of energy.

Opatrny believes that the use of radiation from accretion disks would be especially beneficial because these disks convert energy more efficiently than ordinary stars in thermonuclear reactions. He also suggests that aliens who are worried about the stability of their energy sources would be better off encapsulating small stars that slowly burn their fuel. However, while Opatrny adds: “Rapidly developing civilizations using accretion disks of black holes, it will be much easier for us to detect by the huge amount of heat generated by them.”

Inoue Makoto, an astrophysicist at the Taiwan Institute of Astronomy and Astrophysics Academia Sinica, referring to the Kardashev scale, recalls that ordinary black holes can support so-called Type II civilizations, whose general energy needs correspond to the needs of the entire stellar system, and adds that supermassive black holes can to feed with energy already civilizations of the III type, the energy consumption of which will be compared with the energy consumption of the entire galaxy.