Why did the sky of Japan turn purple before Typhoon Hagibis? 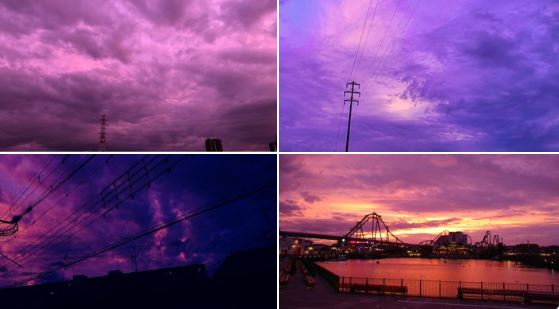 Before Typhoon Hagibis hit Japan, the sky of the capital, Tokyo, turned bright purple, a climatic phenomenon that, although many predicted was a harbinger, has its explanation.

This phenomenon, which covers the purple or purple skies, is very common just before typhoons or hurricanes and, just as in Japan, it also occurred with the passage of Hurricane Michael in Florida or Dorian in the Bahamas.According to scientists, it occurs by the scattering of light through small particles that are altered by the next storm.

To better understand what happens with this phenomenon, you can compare it with sound. It also propagates in the form of waves, but needs a material medium such as air or water to transmit itself. However, light is an electromagnetic wave that can travel in a vacuum. Sunlight is comprised of countless waves of different lengths, i.e. different distances between successive “two peaks” of a wave.

Our eyes can see a certain range of these wavelengths, which correspond to different colors, with violet being the shortest length we can see. As sunlight reaches the Earth, colors are able to reach the surface without interruption, but shorter wavelengths, such as violet or blue, are scattered in all directions by the gaseous molecules of the air. This is known as Rayleigh scattering and is why we see the blue sky. The violet color was caused by this scattering and by the way the typhoon provided the right conditions, such as humidity, for that color, so difficult to see, to appear.